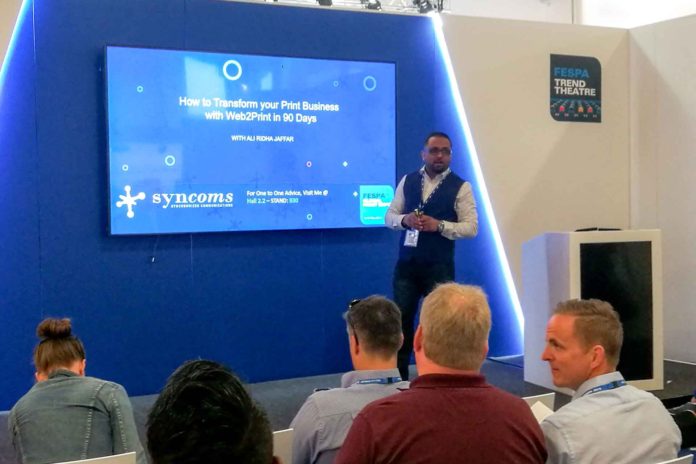 It is now officially Summer, folks, where the warm smell of ink toner and press grease meld together to form that special scent that any printer can pick out from a thousand yards. But what could it mean?

Why, it could only be the opening of FESPA’s annual Global Print Expo, of course – this year, held in Berlin, Germany!

So Much Awesome – So Little Time!

Honestly, I could set up a tent and camp out at these things – such a feast for the eyes, the ears, the brain. They give me so much to see and do at the same time, and the follow-ups that are generated from attending are immense.

I must give my most heartfelt thanks to EFI for allowing me to showcase some of the fantastic Web2Print work Syncoms has developed for clients and, specifically, Jaap Groenenberg, for being a wonderful host and partner.

The show itself was split into three sections – Textile, Corrugated and 3D – across two floors, with a third floor reserved for journalists and the reporting press. The background theme of the event was a focus to the future, exploring how the world of print has evolved and this was brought home to me immediately by the first thing that greeted you as you entered the Expo: a giant cardboard booth, printed from one of the 3D printers being exhibited there.

The twelve sections, split between the two floors, were divided into six sub-sections each and populated with the most cutting-edge innovations from the world of modern printing, including the latest from the textile and recycling industries. The Corrugated section was fascinating, demonstrating the latest technique of assembling layers of cardboard, cut exactly, to create new shapes, such as tables and chairs, drawers and all manner of functional tools.

In real-numbers terms, therefore, over 20,000 visitors came to FESPA, this year, while over 140 different countries were represented. A great week of, and for, print innovation.

Conventional, traditional printing was barely represented at the Expo. Whether that means the organisers believe that paper print is dead, or as I prefer to believe, they think that printing-on-paper is so ubiquitous, so much part of our lives, that it will never leave us and therefore, needs no mention at all – well, I leave it to you to decide!

It seems the future of printing is dependent on UV sources, as most of the exhibitors took pride in demonstrating their new printing abilities, all of which were set or fixed with ultra violet light.

Walking past the 3D-printed Eiffel Tower and the 3D-printed egg-booths was delightful and there were also a number of break-throughs in technology involving printing directly onto wood.

Caldera had set up a football corner, where they were printing football shirts while you waited. Elsewhere, EFI showcased new techniques for printing on textiles which demonstrated that no steam-setting or separate processes to set the print onto the material were required, just a simple and straight-forward UV print directly onto the cloth.

For traditional printers, we were introduced to faster inkjet presses – some of which outperformed the typical staple of rapid print jobs: litho. Break-throughs in this arena included faster outputs and shorter print runs without compromising print quality, which will definitely be a boon for printers of the near-future.

This – as any father knows – is a key part of any Expo. You can only judge how good a convention is, once you bring home the loot and let your kids have at it. In FESPA’s case, the show was terrific, as I am now a hero to my children, who loved the freebies and giveaways that were generously handed out from most of the stands. I did catch sight of a life-sized Incredible Hulk, too – bringing that home would have been a challenge, but would have elevated me to superhero-status amongst the brood… Perhaps next year…

I gave two talks while I was there – one was an hour and a half long, the other only half an hour, which I used as a sort of recap-session for my first talk, rather than trying to squeeze too much into too short a space of time.

They were both received rather well and I enjoyed good attendance for both, with an alert crowd, full of questions to ask once I had finished. It’s always very gratifying to experience a lively Questions-and-Answers session after a talk, as it doesn’t leave me feeling as though no one was really listening, and just needed a place to park their feet for a few moments!

Here, though, I really had the sense that people were interested in pivoting their existing print businesses towards something more technical and ultimately – I feel – more rewarding.

I spoke about deploying a complete Web2Print solution within ninety days, including offering advice about hiring personnel, what sort of pitfalls to avoid and how to manage even the most difficult of customer objections.

What a brilliant week! I feel on top of my game where future innovation is concerned, regarding the wonderfully wide and varied world of print, thanks to the many different collections of technology on display. While it may not be something that Syncoms deals with (yet!), 3D technology has barely begun to affect the wider, general public and it looks like there will be interesting times ahead for many, when it finally does impact.

Once again, I had the opportunity to meet with fascinating individuals from a wide range of backgrounds and countries, something I really look forward to doing, when I go to these events. There were lots of opportunities to do business, lots of contracts to take home with me, lots of individuals wishing to know more. I made some great connections and another batch of life-long friends.

How Effective is Your Post-COVID Strategy?

How Web2Print Vendors and Providers Continually Miss the Point