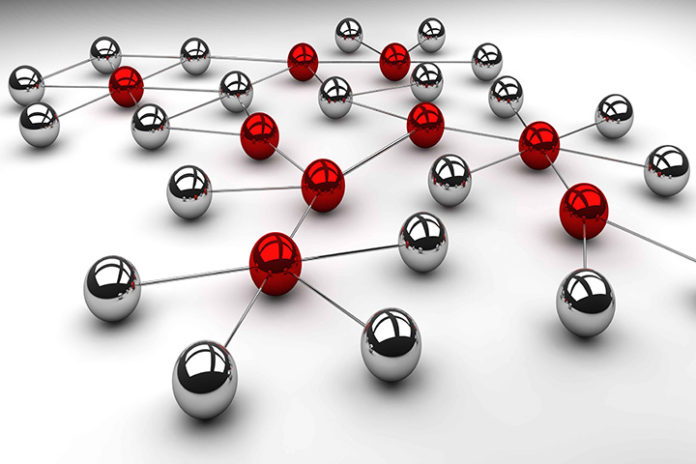 This is an article by Jon Severs published on Printweek on the 27 November 2017.

Simon Biltcliffe, founder and chief executive of Webmart, is speaking into his phone, recording a voicenote. He is on a plane. And the plane is landing. But Biltcliffe speaks on until the last possible moment, telling the flight attendant that he is going to “shut the thing down in a moment”, because he believes in networking. And networking is not just quick handshakes at a swanky party, it’s much more diverse than that. It’s doing things like recording comments for a PrintWeek feature as a plane descends from 20,000ft.

Not everyone shares Biltcliffe’s passion for networking. Some people don’t like the idea pushing themselves outwards. A number of printers, when asked for their networking tips, replied “Oh, that’s not me at all, it’s not something I do”. According to the many others who did wish to speak, that is a massive oversight.

“It is not good enough for everyone to be insular and just look at what they are doing, we have to be outward looking and seek out opportunities to connect as this is how we can find solutions to problems,” says David D’Souza, head of Engagement and London at the CIPD.

“I think the reticence from some is understandable – they see networking as something sales-y and they don’t want to be part of that world. But we need to see it as educational, as mutually beneficial, not necessarily as a sales pitch.”

Of course, sales is still an important part of it. Advocates say one of the major benefits of networking is finding new clients. So, what is the best environment to target?

“We find that awards events are excellent as everyone is relaxed and in the mood to chat,” says Nick Kirby, chief executive at Swanline Print Group. “Exhibitions and conferences are also useful. We have had experience in the past of running focused open days at our facility, which works extremely well in terms of knowledge sharing, but events like awards programmes, seminars and conferences are where we tend to connect.”

In contrast, Chris Childs, managing director and founder at fabric printer Contrado Imaging, says hosting open days is his most effective technique: “The best place to network with our clients is our own events. We invite our loyal customers and craft bloggers to our production facility in West London. Having them here in west London gives us an opportunity to demonstrate how eco-friendly our processes are.”

Economies of scale
Biltcliffe, meanwhile, recommends getting yourself a speaking platform. “Speaking engagements are the best opportunity for me to network as everyone is looking at you, the scale can be 100 or 200 to one,” he says. “That is fantastically efficient. And that is their undivided attention. I always ask people to connect on LinkedIn and then I send them my presentation and push out interesting things to them.”

Asif Choudry, sales and marketing director at market services provider Resource, adds that the internet has made networking easier than ever. Social media, he argues, is key.

“You can network seven days a week now and engage with customers and prospects outside of the transaction. Social media is fundamental part of our daily sales strategy,” he says.

But networking is not just about client acquisition, but adding value and getting repeat business from existing clients.

“The best way to engage with clients is face to face, at a scheduled meeting,” says Ali Ridha Jaffar, sales director at Print Express (part of the Syncoms Group). “In doing so, I’ve learned about services clients require. Many a time, despite being advised, clients may not be fully aware of services we offer and therefore explaining these services in person is of huge benefit.

“I compare meeting clients with having dinner at the table with the family.  Failure to do so over the long term, will hurt you!”

“In my experience, people are more likely to buy from and work with suppliers they like,” he explains. “One of the benefits I get from networking with clients in a non-sales environment is getting a better understanding of their businesses; their wants and needs, etc. It helps me to formulate my offering to be more specific to their requirements.”

D’Souza says approaching networking in this way – as a discussion along general lines in a non sales environment – is ultimately more productive.

“People can smell intent. If you approach networking to gain something, people find it uncomfortable. It has to be an open conversation and a natural conversation,” he says.
For some, these two elements are where networking ends: it’s a function to bring more business into the company and that’s it. But many say that networking is possibly even more important for building contacts with other printers or even with those outside of the sector.

“A lot of the problems businesses face are the same across different sectors and industries. So think broadly about networking opportunities. People are under the same challenges,” says D’Souza.

Gary White, chief executive of Digitalprinting.co.uk, agrees: “I find trade shows very useful, as well as Dscoop, it is always interesting to hear what going on in their ‘print world’ and it’s amazing how much we all have in common with the challenges we face. It was at a Dscoop event that I first saw a demo of HP Production Centre, which we now use to control our production workflow. I was able to discuss it with other PSPs at the event and then we all gave our feedback.”

Kirby says there are even further benefits available should you seek them out: “Networking with other printers is always useful to pick up on the general state of the industry, key people moves, trends and innovation developments. We network with printers through our activities at industry trade associations as well as exhibitions and conferences, and Drupa, of course, where everyone tends to gather.”

Should this networking extend to your nearest rivals, though? It seems to depend on the sector. White certainly does not have a problem with it, and neither does Scott Pearce, managing partner at Datum: “No two companies are the same and it’s all about relationships, whether they are clients, suppliers or competitors.”

In the digital print space, Marsh says such connections with rivals are essential. “A lot of my competitors face the same challenges as me and it is to our mutual benefit to share those and sometimes the solutions. Some of my biggest competitors are also my best customers.”

In commercial print, Jaffar says it is the same story, though not all his competitors agree. “Some of us have tremendous ego and assume we have conquered the market and therefore sharing experiences will somehow render us impotent. This isn’t the case!  I’m all for learning and sharing my experiences.”

A spokesperson for the FSB adds that there are potentially useful customer education campaigns you can run with competitors, too. “There may be opportunity to work collaboratively to run a joint marketing or PR campaign which sets out to change potential customer behaviour in a local area.”

Reasons not to
But for some sectors, such connections can be dangerous, according to Vincent Wilson, production manager at hot foil machinery manufacturer Metallic Elephant. “We would avoid it, our sector is particularly fierce with us and our competitors.Finding and keeping returning customers is a premium.”

Of course, all this assumes that after deciding to network, the actual ‘doing’ bit is easy. Obviously, it is nothing of the sort. As mentioned earlier, not being too direct with sales pitches is a golden rule, but there are also other things to remember.

“You have to be practical,” says D’Souza. “Have sentences prepared if the conversation is not going well or it is making you uncomfortable and you want to end that conversation. One I use is ‘I’ve taken up enough of your time, shall I introduce you to…’

“Also, be careful to notice how you act when you are nervous. You can come across with too much intensity when the nerves come into play, and you have to guard against that.
“Finally, if you do not connect well with someone, do not see that as a reason why you have to hone your technique or panic. Sometimes it does not work out; we’re human, it happens. Just relax and it will come naturally.”

“Social media has created lazy sales people who think they can send a generic connection invite on LinkedIn, get accepted and then drop in further generic sales messages immediately after.  It’s happened to me many times.”

Jaffar also warns to take notice of a room and note if conversations you are having with one potential client may alienate another.

But the biggest issue some printers cite is having a few too many beers.

“Sometimes a group of us will end up having too much fun, and end up regretting all those ‘last’ drinks the night before, the morning after,” says Marsh. “But we don’t seem to learn from that particular mistake!”

While getting printers to be more frequent and better networkers is something most feel is possible, solving the ‘one too many’ issue with many networkers is an issue no-one can see being resolved any time soon. But then, it seems neither do many want it to be.

Organizational Transformation – The Webinar Down Under – Australia, 2nd August 2018

Effective Selling Techniques – The Webinar Down Under – Australia, 2nd August 2018